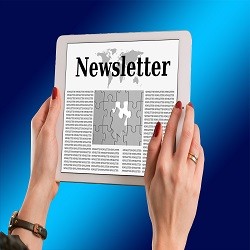 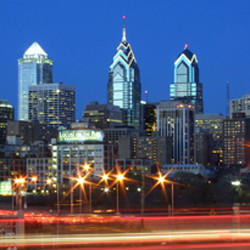 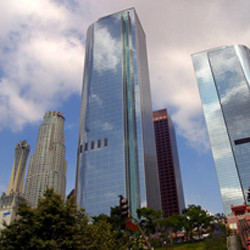 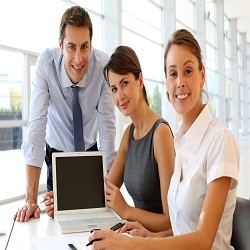 Commercial Corp Finance (CCF) does far more than lending. CCF’s consulting practice solves problems for borrowers and financial institutions alike.  The following is a sampling of people who have experienced the problem solving capacity of the CCF team.

These individuals are available for interviews upon request on a case-by-case basis—except the fired bankruptcy attorney.

•  “When I first went to CCF, it seemed that the world was collapsing.  We had suits coming and going, producing nothing but a cash-drain.  We were running out of money and were winning nothing.  Everything seemed hopeless.  Five hours after meeting these people, I knew there was a G-d.”
Client: K.B., Widow and owner of defunct auto dealership, 2010.  (Instead of being financially wiped out by a multi-million dollar embezzlement, in 38 days from being engaged CCF settled her debts with the lenders and creditors, and the bad guys were being sued for restitution under a civil RICO complaint with a third party paying the legal bills.  Recovery is on the way and CCF will put the client into existing cash-flow real estate investments with no recourse.)

•  “They are fair, honest, forgiving and dynamic.  They know when to be gentle, but they can be very tough to the point of being an intense force to their opposition.  They are extraordinarily effective.   In all my 20+ years as a developer, I have never seen an organization with their resources and impact.”
Client:  K.W., 2010.  (After several years of bumbling, an arrogant ineffective bankruptcy attorney left the client only 30 hours from economic oblivion.  CCF stepped in, stopped the bad from occurring, reorganized the debt of serveral properties, and enabled the developer to move on and prosper in little more than 90 days.)

• “Having the CCF organization as an opponent was an overwhelming experience, until we cooperated.  The best way to deal with them is to calmly communicate and be fair.  Failing to do so can bring a massive battle from multiple directions, conventionally and unorthodox.  Once it was over, they helped us recover.”
Opponent: S.M., Former opponent, now friend, 2009.  (He and a bank were being difficult with the lender having committed some egregious errors.  CCF got them all to cooperate through the use of 16 different skill-sets.)

•  (A paraphrase) “They are obnoxious, pushy, arrogant, have no idea what they are doing and as a result I resigned [was fired] from the case after the client brought them in.”
A fired attorney: Bankruptcy attorney, B.C., 2009.  (The client survived and prospered and still works with CCF.  The client considered filing a negligence complaint against the attorney and his E&O carrier as well as an ARDC complaint against the attorney’s license—using one of CCF’s associated law firms as the lead counsel.  However, CCF suceeded in turning events around, mitigated damages and rescued the client, thereby saving the allegedly negligent attorney.  When CCF came in, the client was literally 30 hours away from losing everything invested in a $10 million net worth.) 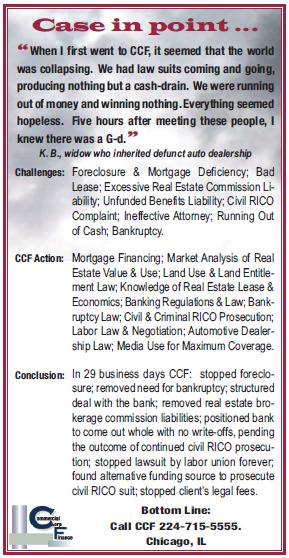